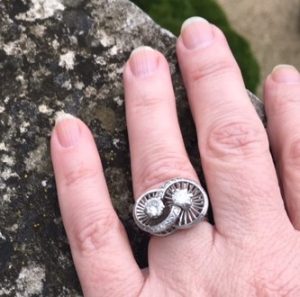 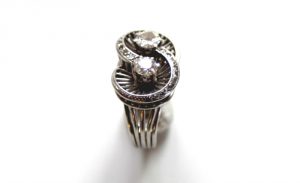 Who can say my wife (girlfriend) or my husband (boyfriend) is my best friend is very rich and blessed in life. A French Toi & Moi ring represents this idea: 2 stones or 2 pearls representing 2 souls intertwined until death do us part. Although these types of rings were already made in the beginning of the 18th century (see also Le bijou de sentiment, an exhibition organised by Chaumet in 2008), I believe it was Napoleon who made this type of ring popular. The to be French emperor offered his future empress Josephine a toi et moi engagement ring in 1795. The ring was made of a diamond and sapphire pear and was sold in 2013 at auction for a million euros. Although not worn by an empress I  offer a beautiful and moderate priced toi & moi ring from the 1950s. The 2 diamonds are set in a platinum eternity sign. This ring might just be the perfect gift for your Valentine.